Here's what you can expect with the new Xbox One Experience

The New Xbox One Experience, powered by Windows 10, rolled out today, meaning it will see a full release to all of the millions of Xbox One consoles out there. Current Xbox One owners will know that this is a huge change for the console, and we've taken a look at some of the design changes, new features, and improvements the NXOE offers. 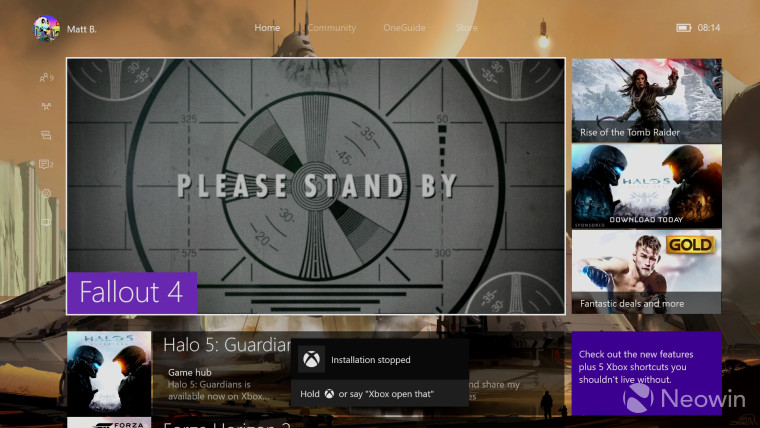 The design change between the launch UI and the NXOE is drastic. Long-time Xbox owners may notice a parallel with the Xbox 360 in 2008, when Microsoft shifted its console UI from the infamous blades theme to a smoother, tile-based theme.

The NXOE brings an additional evolution to Microsoft's long-standing attempts at perfecting the console UI, and while the changes are huge, they feel refined rather than revamped - which means we may be getting close to perfect.

The most immediate change users will notice is the shift from a system reliant on tabs and pages, to a much more downplayed system of tabs, longer individual pages, and side menus. Essentially all of the system and core functions, such as signing in, managing friends, and changing profile settings, has been relegated to menu off the side of the main menu, accessible by tapping the left stick to the left on the home page.

The snap feature, which used to open a rather inefficient menu on the right-hand side, now simply pulls out the left-hand context menu. Users can still snap apps like Game DVR and Microsoft Edge by scrolling all the way down in this menu and selecting the relevant option. This makes snapping apps an unnecessarily lengthy process, but it streamlines one of the most common functions of the snap feature by adding quick buttons - Y for a screenshot, X to record a game clip - which allows you to bypass the Game DVR app entirely.

The home page still highlights your most recently played games and apps, but embraces a large tile for the most recently used application. This means additional recent games and apps are now located below the fold, which makes jumping straight into entertainment a bit more labor-intensive than Microsoft might desire.

The store and community tabs have remained mostly the same, but seem a bit busier than before: more tiles contain ads, a wider variety of games and movies are displayed, and more social settings have been added. This created an information overload effect at first, but was much less pronounced after a few minutes of becoming acquainted with the page.

Additional tabs pop up for apps, movies & TV, and music, once the games tab is highlighted, and all of these suffer from a major issue of relevance. Whether logged in to a profile or not, Microsoft displays a standard set of new releases, top albums, etc. (mostly major box office debuts and top 40 pop) without accounting for how the user feels about the promoted content.

These tabs, it seems, could become much more relevant to every Xbox One owner if Microsoft employed a targeted advertisement tactic - perhaps by pulling recently watched shows and movies from Netflix, and recently listened music from OneDrive or Pandora.

Aside from these design flaws, perhaps the most prominent design effect of the NXOE is how smooth everything functions. Whether it's opening games and apps, switching between tabs, or opening menus, the NXOE is noticeably smoother than the launch Xbox One theme.

The UI of the OneGuide app is well-designed and gives equal play to all content. However, this tab comes across as a bit redundant considering the existing movies/music tabs, and the accessibility of most streaming apps from the homepage.

Most titles are arcade (not AAA), but some standout games are included in the backwards compatibility list, like Fallout 3 and Mass Effect.

Microsoft has built what is essentially a virtual machine within the Xbox One, similar to an emulator, allowing Xbox 360 games to be played in a separate environment. While we haven't tested this feature extensively, it seems to be working well, with few if any bugs or issues with lag and delay.

The NXOE is Microsoft's attempt at standardizing a feeling across multiple platforms, from PC to console. Windows 10 is hardly similar to the NXOE, yet shares many of the same concepts and design techniques. This is likely an attempt at broadening their market base, establishing entertainment dominance for the millions of homes across the world that have a gaming console and a PC.

The redundancy of many features - OneGuide alongside existing entertainment tabs, in particular - means the NXOE process isn't as streamlined as Microsoft may desire. However, this is offset by the fluidity and improved smoothness of transitions in the NXOE, making the entire experience much more streamlined than before, which equals a solid step forward in the world of functional user interfaces.